Maxim D. Shrayer is the curator of lost voices 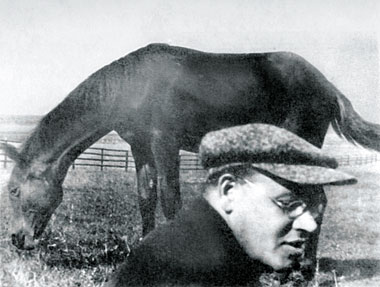 In 2000, during a summer in Moscow, I took a commuter train to the nearby village of Peredelkino, the retreat of the Soviet literary elite. Several prominent Russian writers still have homes there, but Peredelkino owes its allure mainly to Soviet times, when the craft that its residents practiced mattered so much that those who transgressed official boundaries in their exercise of it could be killed for their words.

So, naturally, after wandering through several house-museums, I moved on to the cemetery. The legends on the tombstones followed a pattern: “So-and-so. Writer. Date of birth–date of death.” Then I walked to Boris Pasternak’s plot, behind a low-slung iron fence. “Boris Pasternak,” it said. “1890–1960.” That was it. There was another visitor, an elderly man holding a mesh bag with milk bottles. “Certain people don’t need too much explanation,” he said, pointing to the inscription.

His words came to mind as I read Maxim D. Shrayer’s monumental Anthology of Jewish-Russian Literature: Two Centuries of Dual Identity in Prose and Poetry (2007), writings translated, many by Shrayer, from Russian, some for the first time. By necessity this 1,278-page, two-volume collection suffers from over-identification. Shrayer, a professor of English and Eastern and Slavic languages at Boston College, has to remind his readers that most of his featured authors ever wrote at all, so obscure or forgotten are many of them; with a number of these writers, he also has had to scour their literary output for glints of Jewishness—as if they themselves wanted reminding. Such is the awkward task of anthologizing the literature of a troubled identity.

Hardly any Jews lived in Russia until the late 18th century, when the empire began to absorb parts of Poland, then a center of world Jewry. (By 1897, Russia was home to more than five million Jews—the world’s largest Jewish community.) For the next 200 years, Russian Jews would live with the impossible quandary imposed by their foreign provenance: “The Russians expected the Jews to assimilate if not convert to Christianity,” Shrayer writes. But “fearful of a growing Jewish presence, the Russians prevented the Jews from integrating into Russian life by instituting restrictions and not discouraging popular anti-Semitic sentiments.”

Unsurprisingly, early Jewish-Russian literature vacillated between the parochial concerns of an isolated community and the ingratiations of obedient citizenry (“O Russians, you who love your fellow men!” the essayist Leyba Nevakhovich charitably exclaimed in 1803). The artistry of sharper voices, like the poet Ruvim Kulisher—“Why is my lot much more ill-fortuned/ Than even the fate of the Tatars/Whose gifts to you [Russians] were yoke and torture/Who kept you debtors from afar?/Is it because you hate and envy/The fact your Savior was a Jew?/Whatever may say the mob of enemies/He’s mine, and He has suffered for you“—was spoiled by polemicism. “In Russian-Jewish literature, there is not a single truly artistic work,” the Hebrew poet Saul Tchernichovsky conceded in 1913.

This wasn’t exactly true. But Jewish-Russian literature did not begin to approach its potential until the early decades of the 20th century, when imperial reform and, later, the permissiveness of the early postrevolutionary period made Jewishly conscious prose in Russian more acceptable. These years produced some of the century’s most accomplished writers (Jewish or not): Osip Mandelstam, Isaac Babel, the Odessa poet Eduard Bagritsky (the subject of a book by Shrayer), and the satirists Ilya Ilf and Evgeny Petrov.

But after Stalin took over, Soviet dogma pronounced the “Jewish question” resolved: that is, the U.S.S.R. had succeeded so thoroughly in blending its various nations into a brotherly utopia that there was no longer need for a “Jewish” literature, as there were no longer Jews—only Soviets. For this reason, specifically Jewish commemoration of the Holocaust was forbidden (except for a brief period during World War II)—only Soviets had suffered. And, as Shrayer points out, the post-Stalin “thaw,” despite a reputation for leniency toward liberal literature, actually was not very welcoming to overtly Jewish work. Sadly, by the collapse of the Soviet Union, the country had lost more than three million Jews—half to the Holocaust and the war, the rest to immigration. As Shrayer perceptively notes, today’s Jewish-Russian literature has a striking resemblance to that of a century earlier, when it served the limited interests of a marginalized community.

This generally unhappy history complicates the anthologist’s work. Official discouragement, if not prohibition, of candidly “Jewish” literature meant that writers produced little of it, which often forces the anthologist to choose from among a mere handful of a writer’s works, some far from the author’s best. Osip Mandelstam’s revolutionary anti-Stalin poem—“We live without feeling our country beneath us . . .”—was the poet’s death warrant (and an eternal consolation to his country), but the work, titled “Stalin,” does not appear in the seven pages of the anthology devoted to his writing; instead we read a memoir excerpt (about Mandelstam’s largely unhappy encounters with Jewishness as a child) and several minor poems that contain words like “Leah.” Meanwhile, the more literally Jewish works of Felix Roziner and Philip Isaac Berman—who?—get 18 pages apiece. As I slogged through the anthology’s many forgettable entries, I kept thinking of Dovid Bergelson (1884–1952), Yiddish literature’s greatest modernist, who was born in rural Ukraine. Bergelson was Jewish Russia’s foremost chronicler of the decline of the shtetls, the vulgarities of the prerevolutionary Jewish nouveaux riches, and the dislocations of modernity. He developed his singular impressionistic style by studying the Russians—Tolstoy, Chekhov, Andrei Bely. In terms of quality at least, from the late 19th century to the early 20th, Yiddish, not Russian, was the true literary repository of Jewish-Russian identity. Perhaps this was because Yiddish literature was new and an act of defiance, or because Russians couldn’t eavesdrop as easily.

But even though the best overtly Jewish writing in Russia appears elsewhere than in this anthology, Shrayer’s work—in addition to his admirable rescue of nearly lost voices—affords a meaningful chronicle of Jewish-Russian identity.

In “The Prodigal Son Returns Home,” a 1930 short story by the satirist Ilya Ilf, a young man dreams in terror that his father is a rabbi—a guarantee of ostracism, if not worse, in Soviet society. “A father like that should be despised,” the narrator’s Soviet conscience insists. “But I feel that I love him,” his humanity answers. Ilf’s resolution is ingenious: “‘I never was a rabbi,’” the father reassures his son. “‘You dreamed this. I am a bookkeeper, a hero of labor.’” The story goes on: “I wake up, joyful and excited. . . . how pleasant to love your father . . . if he’s a white-collar proletarian and not a rabbi.” In just three pages, Ilf’s story plumbs in full the singular torment of Jewish-Russian life: Even as the young man desperately wishes to keep from falling afoul of his country’s inflexible rules, he craves a homeland where he can love a father who’s a rabbi. He can admit the latter no more than he’s allowed to contradict the former, and so genuine feeling vanishes into its only permissible vessel—dream life, though even there, he’s restless enough to be horrified by his yearning.

Shrayer’s anthology features many such heartbreaking moments. One of the most rueful and concise comes from his own father, the poet David Shrayer-Petrov: “And yet, despite all, we still loved that land/That cast us away like inferior stuff,/Aborted like something conceived out of error,/All that wasn’t all, it was never enough,/Until they were rid of us cursed ones forever.”